Bulgarians are known worldwide for their hospitality and kindness. Traditions include national holidays and celebrations in honour of God, national heroes, nature, health, etc. And the holidays are passed on through generations, thus they have been preserved in time. Some traditions are observed and kept in their authentic form, while others have modern aspects.

The official religion in Bulgaria is Orthodox Christianity of the Bulgarian Orthodox Church, although there are many Jews and Muslims who live in the country. Major holidays include the National Day, 3 March, Liberation of Bulgaria, Christmas and Easter, which are celebrated with rituals and Bulgarian dishes.

The Bulgarian language is one of the oldest languages ​​of Europe. It has a history of 13 centuries, that influenced the culture of many peoples. In 886, Bulgaria adopted the Glagolitic Alphabet, created by St. Cyril and Methodius in the 60s of the 9th century. The Bulgarian alphabet has 30 letters and there are about 200,000 words in the modern Bulgarian language.

Bulgarian cuisine has some traditional local dishes and other, typical for the Balkan region. Salads of fresh vegetables - tomatoes, peppers, cucumbers, onions, cabbage, carrots, turnips, potatoes are usually served in the summer, and in winter often pickles are eaten. Emblematic of Bulgarian cuisine are salads like "Shoppe’s", "Shepherd’s", Snezhanka, boiled beans salad, and salad of chilli peppers. Bulgarian cuisine is rich in soups - vegetable, meat and fish, some of them are made depending on the season – as, for example, the cold soup "tarator" which is typical for the summer.

Typical main courses are those of Balkan cuisine such as moussaka, stuffed vegetables, lamb, kavarma – a dish of highly seasoned fried meat. Famous dish is the grill - spiced minced meat or small pieces of meat threaded on skewers, alternating with different vegetables. Traditional are pastries – the pride of any Bulgarian housewife – like banitsa, home-made bread, donuts, mekitsi – batter fried in deep oil, tutmanik, Easter cake. Traditionally prepared sausages are still made in small towns and villages and home-made sausages can be seen hung out to dry. This happens during the cold months (maximum temperature 15°C) for 40 - 60 days. 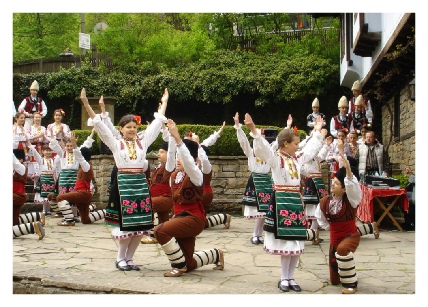 Traditional Bulgarian alcoholic drink is rakiya, which is produced by the distillation of fermented fruit. Typically, the alcohol content is 40%, but domestic production can be even stronger, usually 50 - 60%. Bulgaria also produces many wines from different grape varieties. Cabernet Sauvignon, Merlot and Chardonnay are among the most widely spread, although local varieties are also used, like Mavrud and Gamza.

Bulgarian traditions have very deep and strong roots. They are passed on from mother to daughter and father to son. Ceremonies are considered sacred, having magical power capable of influencing man and the environment. They restore the balance between good and evil, order and chaos, cultural and wild and resolve conflicts at all levels - natural, social, cultural.

Only in Bulgaria, on 1 March, we will decorate you with traditional martenitsa, which will bestow good health and strength throughout the year. The oldest woman in the house twists white and red wool then trims the other inhabitants, the house, the gate, the domestic and pet animals. White is the symbol of longevity, red banishes disease and brings health and strength. Martenitsa is always made of two twisted threads – red and white, and it is worn for health and strength in the year.

In March, everyone wears Martenitsa, hanging at a visible place, until seeing a stork. Then they hide it under a rock and after some time, out of the insects/animals around people predict about the future. With Martenitsa you can decorate both fruit trees and cattle on the farm - for better harvest and fertility in the coming year. Martenitsa is taken off when one sees a stork, a swallow or a tree in blossom. Taking martenitsa off, people make a wish and believe that it will come true.

First, martenitsa, intended to decorate people and livestock, was just of twisted red and white threads. In the course of time, more and more interesting martenitsas are createed - in the form of coins, beads, tassels, squares in red and white; stripes, wrapped like a snake; unique dolls Pizho and Penda, etc.

Only here, around New Year – the sourvakars (children up to 12) will “wish” you health and longevity with fresh cut and decorated cornel sticks. We can see Sourvakars on Christmas Day, which is celebrated on December 25. In the evening, after midnight, festively dressed young men go carolling, led by a married man, called "statenik." They walk to their neighbours’ houses, sing festive carols and say wishes. Sourvakars go in and out of the house with special ritual songs. The Statenik, leaving the house, says a long Christmas blessing. The owners of the house give them bagels, nuts, dried fruits and sausages. For Christmas Eve, the hostess makes ​​an odd number of meatless dishes - 5, 7 or 9. Dried fruits, wheat, beans, peppers stuffed with beans, stuffed cabbage, garlic, walnuts, etc. are laid on the table. A big log is put in the fireplace - "Badnik" – to burn all the night. Depending on the ‘Badnik’ they predict what the coming year will be like. 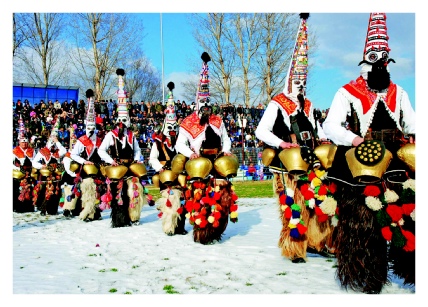 One of the symbols in our country is the ‘kukerstvo’ – a ritual from the pagan past, which chases away evil powers. Men dressed in special costumes and wearing masks participate in this ritual, where they perform special dances. The masks are made of wood. Coloured threads and pieces of cloth, mirrors, shiny sequins, bells and other are glued on them. Some masks have two faces. On one side, the nose is snub and the face is kind, on the other the nose is hunchbacked and the face is sinister. These masks symbolise the good and evil which coexist in the world and are irrevocable. By special magic dances and scary masks, Kukeri games aim to frighten and chase away evil spirits and evil fairies, and to invoke rich harvest next year. The impact of masked kukeri is reinforced by the sound of hanging bells on their costumes. Traditionally, kukeri festivals take place around the New Year, in January and March.

Again, only here you will be able to watch the Fire-Dancing. The so called "walking on coals with bare feet" was born even before Christ as a pagan ritual performed by the ancient Thracians. Dancing on coals, in deep trance, they met the coming summer, glorifying the name of the Sun God, who carried the fire, and they asked him to give them health, success and fertility throughout the year. Now, when performing this ritual, in the evening, a big fire is made in the square of the village. While the fire is burning, the dancers go around all the houses in the village, accompanied by drums and bagpipes, chasing away all diseases and cleansing from sins. They carry the icon of St. St. Constantine and Elena. 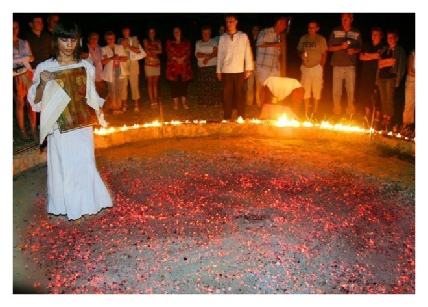 Later, women fire-dancers go near the fire, circling it several times, releasing special sounds: "Váh, Váh, Váh." Then, they poke the embers to create a large circle. Under the sounds of the specific rhythm of the fire-dancing music, they fall in a trance and enter one by one the circle of embers. The first fire-dancer takes the icon of St. St. Constantine and Elena and dances with it. The fire-dancers dance on the coals for no more than two minutes. Sometimes, during dancing, they make predictions about the future of the village. It is believed that the more fire dancers come to dance, the more prosperous the coming year will be.

However, nowadays, this ritual is not accepted so much as a ritual dance but is mainly performed as an attraction in Bulgarian restaurants.