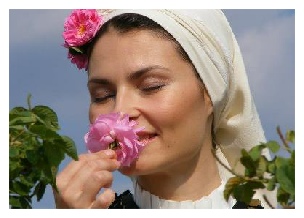 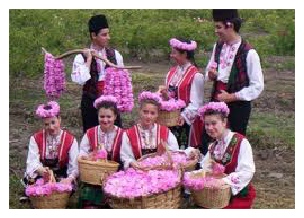 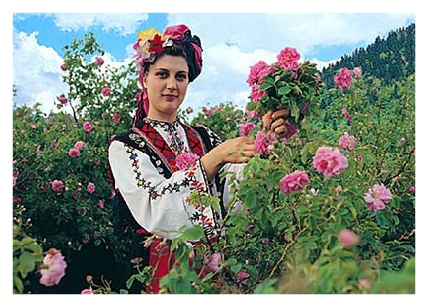 Ancient Greeks believed that the rose bush had grown up from the sea foam, in the way the goddess of beauty and love, Aphrodite, was born. In ancient Rome, the rose was associated with Adonis god and Venus goddess, in India, the Great Mother goddess was known as the Sacred Rose, and in ancient China the red rose was called flower of the goddess. In the golden age of Baghdad, mosque builders used to mix rose water and musk in the mortar and when the midday sun heated the walls fantastic flavour threw out. Cleopatra slept on a pillow filled with rose petals and bathed in rose water. Her amorous conquests were facilitated by fragrant essences. She seduced Mark Antony by soaking the sails of her ship with rose oil, and covered her room with a thick carpet of rose blossoms. The ancient tradition to spread rose petals on the marriage bed and use roses in wedding ceremonies exists even today.

The first roses were brought in Thrace by coming back soldiers of Alexander Makedonski. Even during the Ottoman Empire, European travellers wrote about Bulgarian oil-bearing rose. In the secluded valley between the Balkan and Sredna Gora Mountains it found favourable conditions for growing, such as humidity and cloud cover, heavy spring rains and sun.

The Rose Valley is one of the most spectacular places in Bulgaria, not only because it is a valley full of roses, but also because of the beautiful mountains and rivers around it. Located on the slopes of the Balkans and Sredna Gora Mountains, this is the region with the largest array of rose plants that have been cultivated there for more than three centuries. Besides being beautiful, the roses have other much more significant uses. It is the clean oil, called rose oil, which derived from the rose blossoms. In fact, Bulgaria produces 70 to 85% of the rose oil in the world, which makes it the largest producer on the planet.

The magic happens right here, in central Bulgaria, where the production of rose oil for export to international perfumeries is essential for the local economy. The biggest rose oil production comes from the eastern part of the Rose Valley, Kazanlak, which has been recognized as the city of the largest rose gardens in the world. The city conducts the Rose Festival, which has been celebrated annually since 1933 onwards, and usually takes place in the first week of June.

The story of this modern flower story takes us back to the 14th century, the time when the rose, growing in the vicinity of Damascus, Rosa Damascena, has been brought here. In the valley between the Balkan and Sredna Gora Mountains there are so favourable conditions for its growth that its continued cultivation in our country has significantly changed it, it has become more fascicular and fragrant and in this way it deserved its new name – the Kazanlak oil-bearing rose. And its birth place has become famous as the Valley of Roses. The rose harvest is one of the most important events in the Rose Valley of Bulgaria and is accompanied by multiple celebrations. Roses are picked early in the morning, when there are still dew drops on their leaves. Exactly these drops store the rose oil and are the key to the high quality of rose products. The Rose Festival is held in the first weekend of June and this is the period, during which the Kazanlak oil-bearing rose blooms. The event attracts thousands of visitors and foreign tourists to the city and is associated with different events – demonstration of rose picking, international folk festival, festive procession and crowning of the Rose Queen. Extraction of rose oil happens through water distillation in specific installations that are loaded in the proportions: one part of blossoms and three-four parts of water. When the water in the cauldron boils, under the influence of penetrating superheated steam, the rose oil passes through condensers where the distillate liquefies. And since a long time the measure has been: a kilo of gold = a kilo of rose oil. 3 tons of rose blossoms make a kilogram of the famous rose oil, and the price of a kilogram of rose oil may reach to 6 thousand euro; and for the production of 1 drop of rose oil 30 blossoms are necessary. Over 99% of the rose oil is exported for the needs of luxury cosmetics. 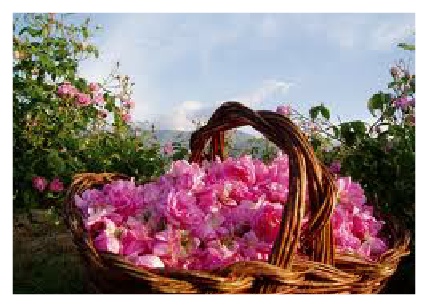 In the unique Museum of Rose in Kazanlak, over 15 000 exhibits related to the rose-picking and rose production throughout Bulgaria are kept. Original photos and documents showing growth and development of roses and rose production are stored, as well as processing tools for rose gardens, containers for storage and export of rose oil and rose water. Rose oil depot and the first laboratory for rose oil testing, created in 1912, have been restored in the Museum of Rose.

Today, because of its high quality, Bulgarian rose oil is one of the most preferred materials by French perfumeries. Many world famous perfume brands use Bulgarian rose oil for their fragrances, and precisely because of its unique qualities, its price has often reached the price of gold over the years. Many of the most popular and favourite perfumes can be proud with the Bulgarian rose in their composition: 5th Avenue of Elizabeth Arden, Omnia Amethyste of Bvlgari, Noa Fleur of Cacharel, Just Pink of Cavalli, Chic of Carolina Herrera, City Glam of Emporio Armani, Allure Sensuelle of Chanel. Rose oil is also present in the contents of the most expensive perfume in the world Her Majesty First of Clive Christian - 500 ml bottle costs € 195,000. A drop of the luxury liquid contains rose essence obtained by the distilling of 170 roses, including the Bulgarian Kazanlak rose. Due to that, a whole year is necessary for the production of this perfume. Rose oil is part of one of the most popular perfumes of all times Chanel No 5 - the only thing Marilyn Monroe put on herself before going to bed. Today, a bottle of the perfume is sold every 30 seconds.

Rose oil affects the human body: as an antidepressant, aphrodisiac and anti-inflammatory and antivirus, antiseptic, astringent mean, and has many other applications. It is a great fragrance for meditation, creativity, concentration, delight, happiness, joy and peace. Rose fragrance enchants the senses and awakens the heart chakra, strengthens and allows the energy of love to spread throughout a person or anyone, when the heart has been closed by grief. Rose blossoms are used for the preparation of rose honey, jam, brandy and liqueur.