Bulgaria over the centuries.

Bulgaria is a country with a long and turbulent history, situated at the crossroads between Europe and Asia. In its millennial history goes through ancient times, middle ages and modern times. The territory of present day Bulgaria includes lands which were among the earliest inhabited places in Europe. Even in the 3rd century BC, the Thracians had settled here as they had come to the Balkans from north-east and created prosperous states during Hellenism. In ancient Greece, Thracians were considered warriors of cavalry, non-standard for Greece. As early as Roman times, Thrace was the main source of warriors and gladiators. The leader of the biggest slave rebellion against Rome – the gladiator Spartacus – was a Thracian from the tribe of Maedis. Nowadays, the basic sources of data about the Thracians are the archaeological excavations of big Thracian tombs and settlement centres, as well as the temples in the open and the sanctuaries. The lands of ancient Bulgaria are the cradle of the earliest civilisations in Europe – the excavations near Ohoden, near Vratsa, the mound near the village of Unatsite (by Pazardhik) and the oldest moulded gold discovered at the Varna chalcolithic necropolis are evidence of that. From the era of ancient Thrace we have inherited valuable cultural monuments – tombs (the Kazanlak Tomb, Alexandrovska Tomb, Sveshtarska Tomb etc.), treasures (Panagyursko, Rogozensko, Valtchitransko etc.), sanctuaries and temples (Perperikon, Starosel, Kozi Gramadi, Begliktash, etc.)

The successor of Great Bulgaria, the First Bulgarian State, began its history in 681, on lands inhabited by Thracians, Byzantines and Slavs, where the proto-Bulgarians of Khan Asparuh arrived. The new state was located between the Danube River and the Balkan Mountains and it gradually extended to the south-east, ruled by the fearless proto-Bulgarians, authoritative administrators, who believed that unity made strength, who strived at preserving the memory of their ancestors’ deeds, who remembered that even though a man lived well, he would die and a new one would be born.  Christianity, accepted as official religion by Knyaz Boris I, replaced the religions of proto-Bulgarians and Slavs, who were culturally united by the deeds of the disciples of Cyril and Methodius: Kliment, Naum and Angelariy. They brought to Bulgaria the new alphabet of the two brothers, the Glagolitic alphabet, and the Cyrillic alphabet was created in the beginning of the 10th century. About 900, a common language, based on Slavonic, began to unite the proto-Bulgarians, Slavs and Thracians into the new Bulgarian nationality.

Many great tsars reigned in mediaeval Bulgaria. The first among them was the son of Knyaz Boris I – Tsar Simeon, whose reign was called the Golden Age of the Bulgarian state. Next came the peace-loving and long-lived Tsar Peter, the brave Samuil, whose heart could not stand the macabre view of his numerous blinded soldiers. After the hard two centuries of Byzantine domination, the Second Bulgarian State was governed by the brave family of the Asens – one after the other, the brothers Asen and Peter came to the Bulgarian throne, followed by the youngest brother Kaloyan. Bulgaria started to regain its lands and authority – Tsar Ivan Asen left after his reign Bulgaria bordering three seas.

At the end of 14th century, the country was conquered by the Ottoman Empire. In 1878, as a result of the Russian-Turkish War, the Bulgarian state was restored. In 1879, the first Bulgarian Constitution was adopted – one of the most democratic for its time.

Tartars, Turkmen, Normans have attacked our native lands, Byzantines and Ottomans have ruled them, but the Bulgarian language and culture have been preserved over the centuries. Even today, we talk with passion and pride about our past looking with love and hope to the future. At the end of 1989, democratic changes began in Bulgaria. A new Constitution was adopted. In 2004, Bulgaria became a member of NATO. Since 1 January 2007, after meeting the membership criteria, Bulgaria became a full member of the European Union. 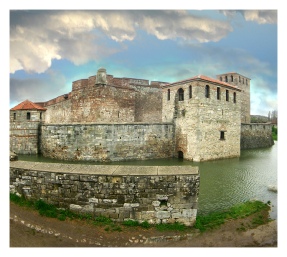